Each surah is a coherent collection of verses. These verses are not disjoined and haphazardly placed in a surah. In fact, each surah has a theme and all the verses are aptly placed with regard to this theme. When a surah is studied while keeping in consideration its theme and when its coherence becomes evident as a result of this study, it comes out as a well-knit unit. What is the values of this coherence? While answering this question, Imam Amin Ahsan Islahi writes:

It is absolutely incorrect to think that nazm (coherence) is merely a subtle thing which has no importance as regards the real objective of Islam. In my consideration, its real worth stems from the fact that it is the door through which the real knowledge and wisdom of the Quran can be reached. A person who reads the Quran without the guidance of nazm will at best obtain some independent and solitary directives.

Although independent and solitary directives are also valuable, however there is a world of difference in having knowledge of the effects of certain plants and herbs from a dictionary of medical terms and in the fact that an adept doctor prepares a prescription from all these ingredients which totally cures the patient. The brick and fabric of the Taj Mahal would have been used in many different buildings of the world; however, in spite of this, there is only one Taj Mahal. Without any real comparison, I would say that the words and sentences of the Quran all belong to the Arabic language; however, the unparalleled arrangement of the Quran have bestowed on them the ambience and beauty which nothing on this earth can rival.

Just as families have genealogies, pious and evil deeds too have genealogies. Sometimes we regard a pious deed to be an ordinary one, whereas it actually belongs to the family of pious deeds from which the branches of great pious deeds originate. Similarly, sometimes we regard an evil deed to be ordinary, whereas it belongs to that family of evil deeds from which originate the deadliest of diseases. A person who wants to understand the wisdom of religion should be aware of all these steps and stages of pious and evil deeds otherwise there is a strong chance that he would end up considering a disease which is a harbinger to tuberculosis as the one which fortells of influenza and vice versa. This wisdom of the Quran is not evident from isolated parts of its discourse but from the coherence and arrangement of the discourse. If a person is aware of the individual verses of a surah, but is not aware of the meaningful coherence that exists between these verses, then he will never be able to have access to this wisdom.

Similarly, the Quran has furnished historical arguments as well as the ones found in human nature and in the external world in order to substantiate some principle premise. When a person who is aware of this arrangement deliberates on a surah, he will feel that he has read a very comprehensive, well-argumented and satisfying discourse on the topic under discussion. On the other hand a person who is not aware of this arrangement may have an idea of the contents of the discourse but will be deprived of the wisdom found in the surah.1

After that he has explained the importance of Quranic coherence with reference to the collective and political unity of the Muslims:

Every person knows that it is the strong rope of the Quran that holds together the fabric of this ummah, and all Muslims have been directed to hold steadfast to this rope and not divide themselves into factions. An obvious requirement of this directive is that we must turn to the Quran to resolve all differences which arise among us; however, it is very unfortunate that all of us have different opinions regarding the Quran. There are so many views in the interpretation of every verse, and most of these views are contradictory to one another and we do not have any reference point to decide which view is the correct one. If a difference of opinion arises in the interpretation of a discourse, the most satisfactory thing which can resolve this is the context and coherence of the discourse. Unfortunately, most people do not regard the Quran to be a coherent book having a definite context. The result is that differences of opinions have become permanent. A lot of differences of opinion which have arisen in fiqh are because of disregarding the context of a verse. If this context is kept in consideration, one will find that at most occasions only one interpretation is possible.

More critical than the issue of juristic differences is the case of misguided sects. Most of these sects have lent credence to their beliefs through various verses of the Quran. They normally sever a verse from its context and then interpret it the way they want to. Obviously, once a sentence is severed from its context, one can attribute multiple meanings to it if one wants to. Some of these meanings could never have even been imagined by the speaker. But for the fear of consuming a lot of space, I could have given several examples of verses which have been misinterpreted owing to this approach and wrecking havoc with the actual meaning they imply. However, no one seems to be bothered to just look up the context and placement of the verse. He does not give any importance to these aspects if the Quran is being deliberated upon.2

It is evident from the foregoing discussion that what makes the Quran a document having one definite meaning and which resolves all differences of interpretation and thus verifies Imam Farahis wordsالْقُرْآنُ لاَ يَحْتَمِلُ إِلاَّ تَاْوِيْلاً وَاحِداً 3 about it is the coherence it possesses. Imam Amin Ahsan Islahi writes:

In my exegesis, I have tried to determine a single interpretation of each Quranic verse because I have given full importance to the context and coherence in the verses. In fact, the truth of the matter is that I have been forced into this because the context and coherence in the verses have not allowed me to swerve from this. The right interpretation becomes so clear and obvious, and if a person is not deeply prejudiced, he can give his life but he cannot bear to deviate from it.4

It is because of this coherence in the Quran that when it called upon its addressees to emulate it, it did not ask them to produce independent verses but to produce one or more surah like it:

And if you are in doubt about what We have revealed to Our servant, then [go and] produce a single surah like it. And [for this purpose] also call your leaders besides Allah, if your are truthful [in your claim]. (2:23)

Do they say: "He has invented it himself"; Tell them: "Produce ten invented surahs like it and call on whom you can except God if you are truthful." (11:13)

The way the exponents of the Farahi school of thought have revealed the coherence in the Quran does not require any further discussion to prove that it does exist; however, what is the nature of this coherence? The following points will help in understanding it:

1. Each surah has a theme round which its contents revolve and make it into a unified whole. It is the most comprehensive statement of its contents and what the soul is to a body, the theme is to a surah.

2. Together with the main text of a surah, there is an introduction and a conclusion. Surahs have distinct sections to mark thematic shifts, and every section is paragraphed to mark smaller shifts. Some surahs may be without sections. The verses of the introduction and of the conclusion also may at times be divided into paragraphs.

3. These paragraphs and these sections relate to each other not through a verse to verse linear connection but through various literary devices like similes, comments, conditional statements, parenthetical statements, principle statements, warning statements, parallelism, conclusion of a theme, questions and their answers, and statements or passages which return to what is said in the beginning. This of course is not an exhaustive list.

4. The text of a surah progresses through these paragraphs and section and gradually reaches its culmination. As a result, the surah assumes a distinct and unique form and shape, and becomes a complete and independent whole.

(Adapted from Ghamidis "Meezan" – the section "Coherence in the Discourse, Principles of Understanding the Qur’an".

This writing is based on the transcript of the interview of Javed Ahmad Ghamidi with Lemon News, India in 2013. You can watch the complete programme here. Host: Islam is a well established religion, and is meant to exist forever. However, with time and rapid changes in global politics, the understanding and image of Islam have… 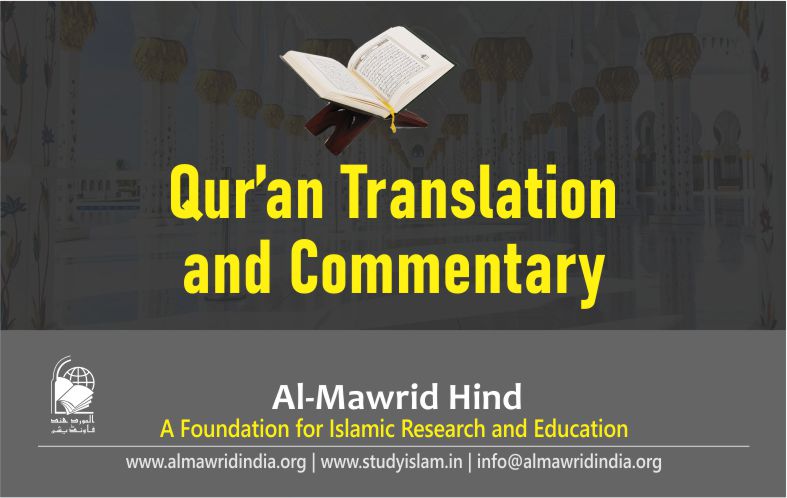 Introduction Religion is the guidance which was first inspired by the Almighty in human nature and after that it was given by Him with all essential details to mankind through His prophets. Muhammad (sws) is the last of these prophets. The Qur’an is last and final and not the first Book of this religion, revealed…

Author: Amin Ahsan Islahi (d. 1997) The ḥadīth literature basically consists of individual-to-individual reports (akhbār-i āḥād). It is, therefore, necessary for us to properly grasp the issue of the authenticity of akhbār-i āḥād. The extraordinary importance the Ḥadīth holds as the source of the religion and the sharī‘ah, requires that we fully appreciate the implications…

Author: Mustansir Mir One of the long-standing objections levelled against the Qur’ān by its non-Muslim critics is that it appears to have no regular form or structure. It is said that its verses follow one another with little sense of interconnection and its sūrahs seem to have been arranged in a sequence based on the…

Author: Amin Ahsan Islahi To describe the principles of how to discern nazm is more important than to enumerate the arguments in order to substantiate its existence in the Holy Qur’ān. A person does not feel compelled to deny nazm in the Holy Qur’ān because he does not appreciate its need and import or is…