The above quoted verse of Sūrah Nūr mentions the directive of ‘Mukātabat’. At the time of the revelation of the Qur’ān, the institution of slavery was as essential to the economic and social needs of the society as the institution of interest is considered in present day societies. In markets, slave-men and slave-women were bought and sold, and affluent houses had slave-men and slave-women of all ages. In such circumstances, a sudden directive for their emancipation would have resulted in many evils: for livelihood, men would have been forced to resort to beggary and women to prostitution. For this very reason the Qur’ān adopted a gradual way to eradicate this evil from society and after many gradual measures of eradication, the above quoted verse revealed a directive for their liberation. The word ‘Mukātabat’ used in it as a term which means that a slave make a contract with his master according to which he would be required to pay a certain sum of money in a specific time period or would carry out a specific service for his master; once he would successfully fulfill either of these two options, he would stand liberated. In the above quoted verse, the Almighty has directed the Muslims to necessarily accept this contract made by a slave if he wants to make it and has the required ability to become financially independent. It is further stated that a Muslim government should spend money from the public treasury, which here is called the treasury of God, in helping such slaves. It is evident from the words of the verse that just as this right of ‘Mukātabat’ was granted to slave-men, it was also granted to slave-women. This, in other words, was in fact a declaration that slaves could now be masters of their destiny and could obtain liberation whenever they wanted.

The above stated verse is the last directive regarding slavery. Prior to this, various other directives were given at various stages because of which it gradually became possible for this evil to be eradicated from the society. These are summarized below:

1. In the very beginning of its revelation, the Qur’ān regarded emancipation of slaves as a great virtue, and urged people in a very effective way to do so. The tremendous appeal found in the words it adopted ‘فَكُّ رَقَبَة’ (release the necks) can be well imagined by a person who has flare for the language. It is evident from the context of such expressions – wherever they are found in the Qur’ān – that it has regarded this virtue to be the first as well as the greatest step in pleasing God. [1]

In a similar manner, the Prophet (sws) also urged Muslims to liberate humanity from the yoke of slavery in the following words: ‘Whoever liberated a Muslim slave, the Almighty in return for every limb of that slave would shield every limb of that person from Hell’ [2]

2. People were urged that until they free their slaves they should treat them with kindness. The way their masters had total and unchecked control of them in the age of ignorance was put an end to. They were told that slaves are human beings too, and no one should in any way violate the rights they possess as human beings.

Abū Hurayrah (rta) narrated from the Prophet (sws): ‘Slaves have a right to food and clothing and he shall not be asked to carry out an errand that is beyond him [3]

Abū Dharr Ghaffārī (rta) narrates from the Prophet (sws): ‘They are your brothers. The Almighty has made them subservient to you. So whatever you eat, feed them with it, whatever you wear, clothe them with it and never ask them to do something which is beyond them and if there is such a task then help them out with it [4].

Ibn ‘Umar (rta) narrates from the Prophet (sws): ‘Whoever slapped a slave or beat him up should atone this sin by liberating him [5].

Abū Mas‘ūd (rta) says: ‘Once when I was beating my slave I heard a voice from behind me: “O Abū Mas‘ūd you should know that the Almighty has more power over you”. When I turned back, I found that it was the Prophet. I immediately remarked: “O Messenger of God, I release him for the sake of God”. The Prophet said: “Had you not done this you would have been given the punishment of the Fire”. [6]

Ibn ‘Umar (rta) narrates that once a person came to the Prophet (sws) and asked: ‘How many times should we forgive our servant’. [At this], the Prophet kept quiet. He asked again and the Prophet again kept quiet. Upon being asked the third time, he answered: ‘Seventy times in a day’. [7]

3. In cases of un-intentional murder, Zihār, and other similar offences, liberating a slave was regarded as their atonement and sadqah [8].

4. It was directed to marry off slave-men and slave-women who were capable of marriage so that they could become equivalent in status – both morally and socially – to other members of society. [9]

5. If some person were to marry a slave-woman of someone, great care was exercised since this could result in a clash between ownership and conjugal rights. However, such people were told that if they did not have the means to marry free-women, they could marry, with the permission of their masters, slave-women who were Muslims and were also kept chaste. In such marriages, they must pay their dowers so that this could bring them gradually equal in status to free-women. The Qur’ān says:

If any of you have not the means wherewith to wed free believing women, he may wed believing girls from among those whom you own: and Allah has full knowledge about your Faith. You are one from another: wed them with the permission of their owners, and give them their dowers, according to the norms; [the only condition is that] they should be kept chaste, neither being lustful, nor taking paramours … This permission is for those among you who fear sin; but it is better for you that you practice self-restraint. And Allah is Ever-Forgiving, Most Merciful. (4:25)

6. In the heads of Zakāh, a specific head ‘الرِّقَاب  فِى’ (for [freeing] necks) was instituted so that the campaign of slave emancipation could receive impetus from the public treasury. [10]

7. Fornication was regarded as an offence as a result of which prostitution centers that were operated by people on the basis of their slave-women were shut down automatically, and if someone tried to go on secretly running this business, he was given exemplary punishment. [11]

8. People were told that they were all slaves of Allah and so instead of using the words ‘عَبْد’ (slave-man) and ‘اَمَة’ (slave-woman), the words used should be ‘فَتَى’ (boy/man) and ‘فَتَاة’ (girl/woman) so that the psyche about them should change and a change is brought about in age old concepts. [12]

9. A big source of the institution of slavery at the advent of the last Prophet (sws) were the prisoners of war. The Qur’ān rooted this out by legislating that prisoners of war should be freed at all costs – either by accepting ransom or as a favour by not taking any ransom money. No other option was available to the Muslims. [13] 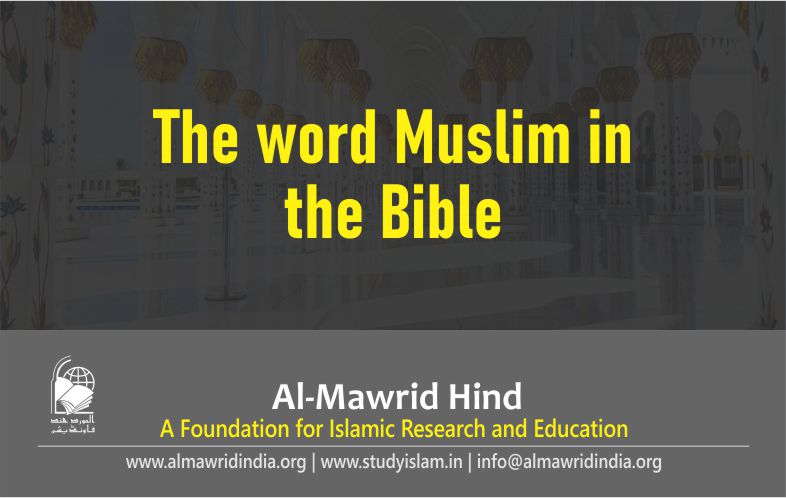 Did the word ‘Muslim’ exist before the time of Prophet Muhammad (sws)? Were the believers called Muslims as the Qur’an claims in 22:78?

There are some major misconceptions about this issue. Muslim societies had monarchs ruling them for a very long period, stretching about a thousand years. Therefore, their system of government was based on monarchy. Excluding the period of the Rightly Guided Caliphs which consisted of a democratic system of governance, the rest of the time it…